With over 400 security professionals under one roof, John Manzoni, Chief Executive of the Civil Service and Permanent Secretary for the Cabinet Office, opened the event, marking one year since the formation of the Government Security Group.

John highlighted the importance of improving security across government and talked about key progress to date and building a strong government security profession.

We welcomed onto the stage the new government chief security officer, Dominic Fortescue, who discussed his fascinating national security career that led him to 70 Whitehall.

Dominic’s speech was followed by panel discussions focussing on diversity and barriers within the security community, as well as on career pathways. Attendees heard first-hand stories from a cyber apprentice and a senior security adviser - learning about what opportunities are available in the profession, and how you can transition from private sector to the civil service.

The event was an opportunity for colleagues to share thoughts and exchange ideas together as a community of security professionals. Participants chose from a range of nine workshops demonstrating the cross-government effort on security. Workshops from CPNI, HM Prison Service, UK NACE, as well as Government Security Group colleagues, covered topics from cutting edge tech to security in prisons, trends in security and insider threats.

The day culminated in the highlight of the inaugural ‘Recognising Our People’ awards for colleagues in government security. The awards showcased the variety and high quality of the work in government security and how the profession contributes towards achieving the vision of ‘a brilliant Civil Service’.

The symposium also featured collaborations with small business partners, allowing attendees to see and hear about the latest products and joint-working between the private sector and government around protective security.

Oliver Dowden CBE, MP, Minister for Implementation, also met with delegates and private sector partners during a special reception for the security profession following the symposium. 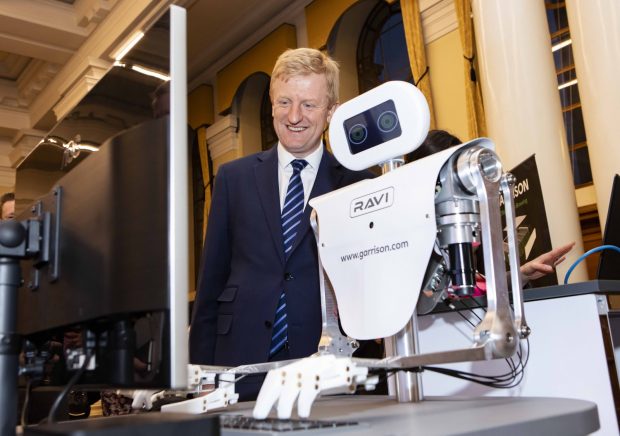 Keep an eye out for the next blog post on cyber apprentices working within civil service coming soon.